Three smooth dogfish sharks (Mustelus canis). These sharks have a spiral-shaped gut that allows them to digest food more slowly and with less energy.Elizabeth Roberts/Wikimedia Commons

Contrary to what popular media portrays, we actually don’t know much about what sharks eat. Even less is known about how they digest their food and what role they play in the wider ocean ecosystem.

For more than a century, researchers have relied on flat diagrams of sharks’ digestive systems to discern how they work and the impact of what they eat and excrete on other species in the ocean. Now, researchers have produced a series of high-resolution 3D scans of the intestines of nearly three dozen species of sharks that will provide insight into how sharks eat and digest their food.

“It’s high time that modern technology was used to examine these incredible spiraling shark intestines,” said lead author Samantha Leigh, assistant professor at California State University, Dominguez Hills. “We have developed a new method to digitally scan these tissues and now we can examine soft tissues in as much detail without having to cut them out.”

A CT scan image of the spiral intestine of a Pacific Spiny Dogfish (Squalus suckleyi). The beginning of the intestine is on the left and the end on the right.Samantha Leigh/California State University, Dominguez Hills

The researchers primarily used a computerized tomography (CT) scanner at UW’s Friday Harbor Laboratories to create 3D images of shark intestines, sourced from specimens housed at the Natural History Museum in Los Angeles. The machine works like a standard CT scanner used in hospitals: a series of X-ray images are taken from different angles and then combined using computer processing to create three-dimensional images. This allows researchers to see the intricacies of a shark’s intestine without having to dissect or disturb it.

“CT scanning is one of the only ways to understand the shape of shark intestines in three dimensions,” said co-author Adam Summers, a UW-based Friday Harbor Labs professor who led a worldwide effort to scan shark skeletons. fish and other vertebrate animals. “The intestines are so complex, with so many overlapping layers, that dissection destroys the context and connectivity of the tissue. It would be like trying to understand what was reported in a newspaper by picking up scissors from a rolled-up copy. The story does not stand up. »

From their analyses, the researchers uncovered several new aspects of how shark guts work. These spiral-shaped organs appear to slow the movement of food and direct it downward through the intestine, relying on gravity in addition to peristalsis, the rhythmic contraction of smooth muscle in the intestine. Its function resembles the one-way valve designed by Nikola Tesla over a century ago that allows fluid to flow in one direction, without backflow or assistance from moving parts (watch a video of how the Tesla valve works). 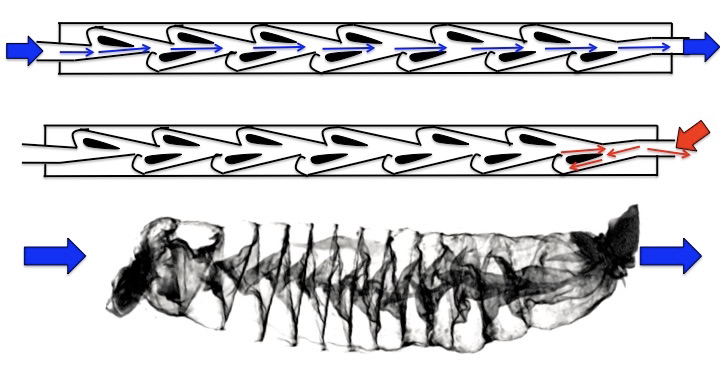 A Tesla valve, shown in the diagram above, produces unidirectional flow without any backflow or use of mechanical parts. The spiral intestine of a shark, shown below the valve diagram, appears to have a similar structure.Samantha Leigh/California State University, Dominguez Hills

This discovery could shed new light on how sharks eat and process their food. Most sharks typically go days or even weeks between large meals, so they rely on their ability to retain food in their system and absorb as many nutrients as possible, Leigh explained. The slowed movement of food through their gut caused by the spiral gut likely allows sharks to store their food longer, and they also use less energy to process that food. 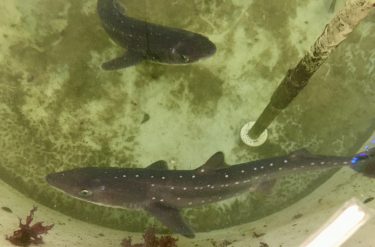 Because sharks are the ocean’s top predators and also eat many different things — invertebrates, fish, mammals and even seagrass — they naturally control the biodiversity of many species, the researchers said. Knowing how sharks process what they eat and how they excrete waste is important for understanding the ecosystem as a whole. 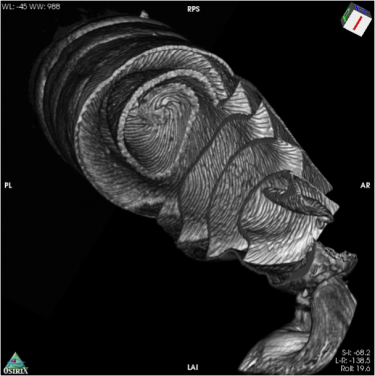 The authors plan to use a 3D printer to create models of several different shark intestines to test how materials move through the structures in real time. They also hope to collaborate with engineers to use shark intestines as inspiration for industrial applications such as treating wastewater or filtering microplastics out of the water column.

The other co-authors of the article are Donovan German of the University of California at Irvine and Sarah Hoffmann of Applied Biological Services.

Disney files a patent to produce its own metaverse via personalized 3D images: will you ever be able to discover this attraction?

Greg Chow/Shutterstock / Greg Chow/Shutterstock Disney may be creating what it describes as its own metaverse following hints from the CEO as to the state of the company in November 2021. The company was recently approved for a “virtual world simulator in a real place,” according to a patent filing. See: Despite fan outrage, is […]

Touch or click and drag your mouse to explore. See more 3D models. Researchers have successfully digitized 19th century glass models of 15 marine invertebrates made by Rudolf and Leopold Blaschka. In order to capture the complexity, detail and shiny surfaces of these models, the researchers took 250 to 700 images of each invertebrate, created […]